Impressive phone, but not for power users

The budget smartphone market in India is brimming with options with contenders from brands such as Realme, Xiaomi, Infinix, and Nokia. Motorola has also been a solid player in this market and with the launch of the Moto G42, they’ve added another option for users under ₹15K. The phone comes touting a host of features such as Near Stock Android 12 out of the box, 50 MP primary camera, 5,000 mAh battery, IP52 rating, and more. It proves to be a tough competition to phones from other companies under this price bracket such as the Realme 9i and the Redmi 10 Prime. Well, at least, on paper. How does the phone hold up in real life and is it a viable option under  ₹15,000? Let’s find out that and more in this review.

Let’s start with what is arguably the most important part of a phone – the performance. The Motorola Moto G42 is powered by the Qualcomm Snapdragon 680 SoC, a 4G processor, so you won’t get 5G connectivity with this device. This is paired with 4 GB LPDDR4x RAM and 64 GB uMCP internal storage. There is only one RAM + storage variant of the Moto G42 in India, unlike the global variant. The internal memory is also expandable up to 1 TB via a microSD card.

Kicking things off with real-world usage, the Moto G42 performs without hitches for most basic tasks. These include calling, texting, web browsing, social media, and others. However, multitasking is another ball game where the G42’s 4 GB RAM proves to be a deterrent. Basically, don’t expect more than 3-4 apps to run concurrently without hitches. 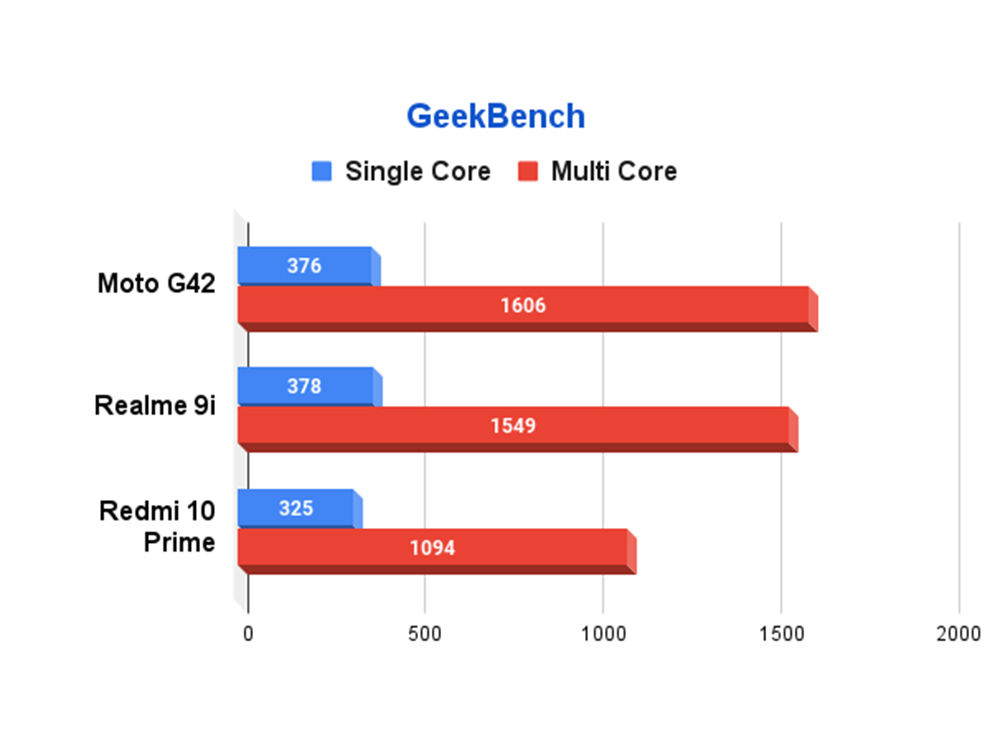 We also ran several benchmark tests and the results were pretty interesting, for the most part. In AnTuTu, the phone bagged a similar score when compared to the Redmi 10 Prime, but the Realme 9i scored considerably higher even though it has the same processor. In GeekBench, the Moto G42 got good scores; equal to or higher than the competition, however, in PCMarkWork, the Moto G42 clocked in abysmal scores in comparison to the Redmi 10 Prime and Realme 9i. 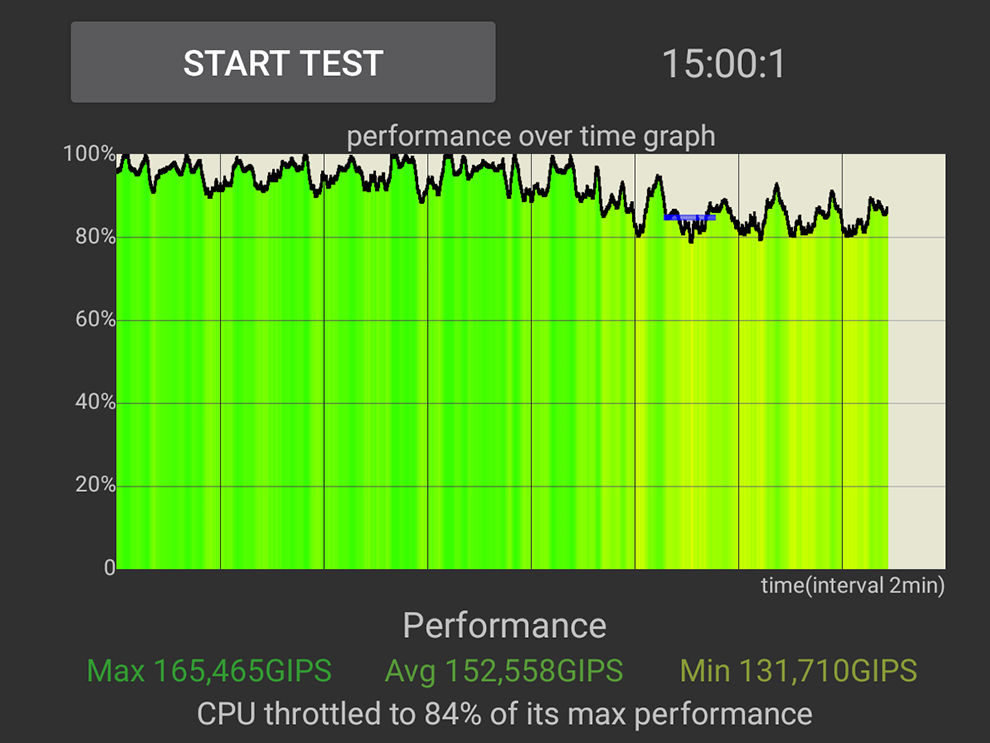 PCMark Work mimics real-life workloads such as photo editing, web browsing, and more, so this is a cause for concern. Especially, for those who edit photos and videos on a regular basis on their smartphones. We also ran the CPU Throttling Test where the phone throttled to 84 per cent of its maximum performance in 15 minutes, which is a decent score. 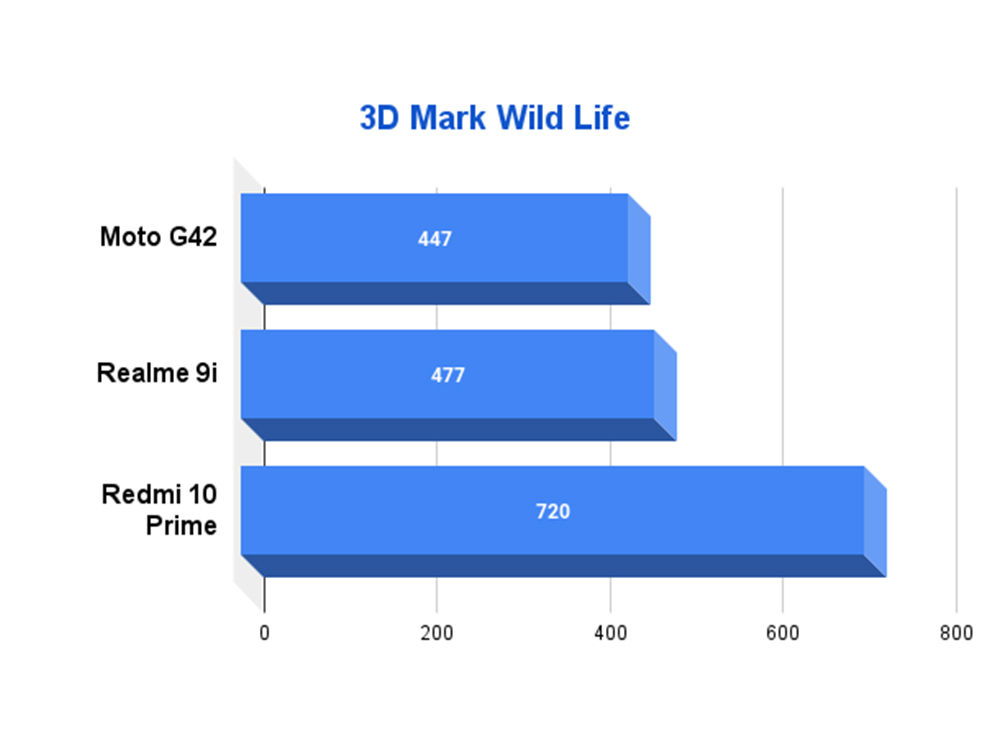 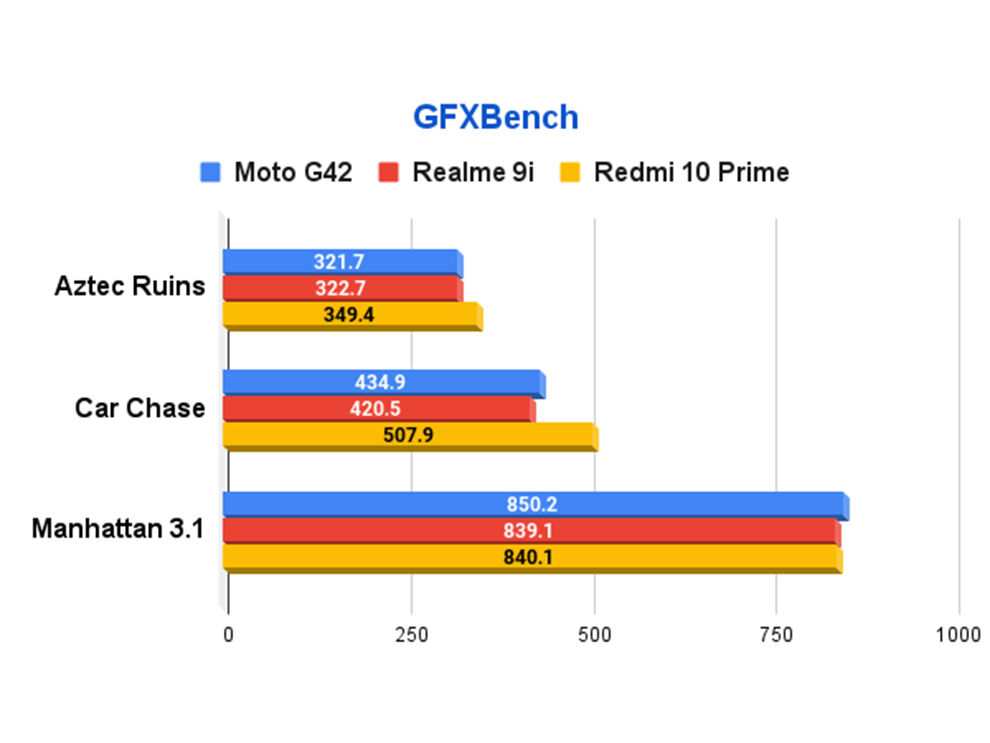 Moving on to GPU benchmarks, the Moto G42 did well in both 3D Mark Wild Life and GFX Bench, but the Redmi 10 Prime consistently got a better score – meaning that it is better equipped to deal with graphic-intensive tasks such as gaming. Speaking of gaming, we ran Call of Duty: Mobile through Gamebench Pro and the phone is capable of 58 fps at 90 per cent stability on Medium graphics, which is pretty great for its price point. 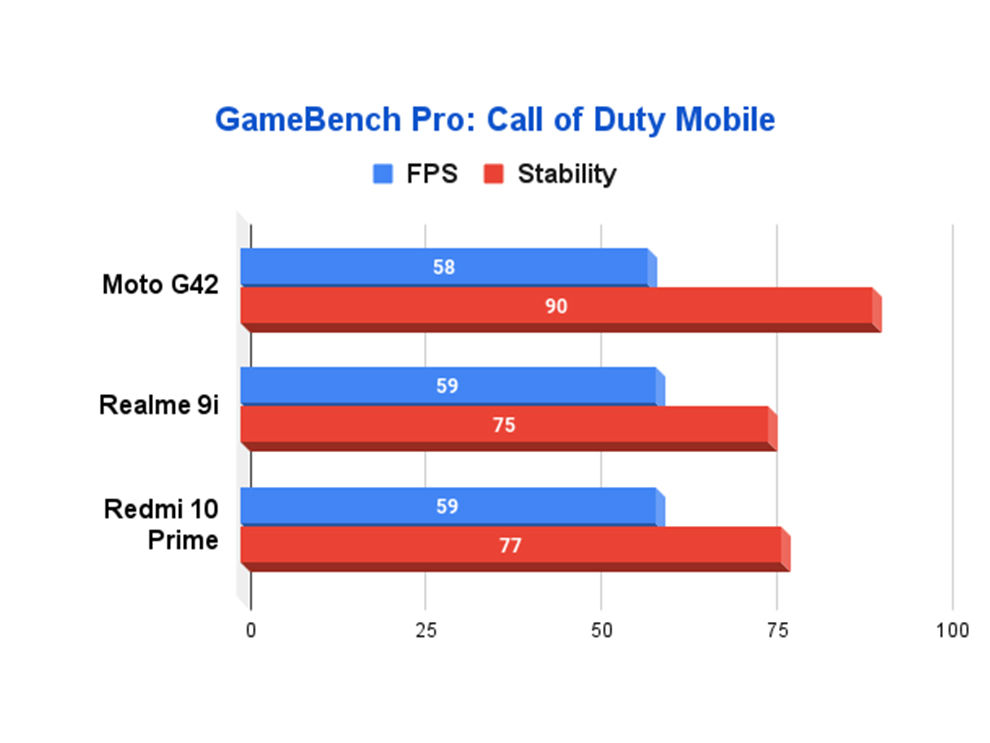 Lastly, let’s talk about the software experience. The Motorola Moto G42, as with other Moto phones, comes with a near-stock Android experience; which will definitely appease purists. You get Android 12 out of the box with the MyUX skin on top which is very close to stock Android. The UI is clean and mostly bloatware-free. There are two third-party apps on the phone, but these can be uninstalled. Users also get 1 year of OS updates and 3 years of security updates guaranteed, which is fantastic.

The camera experience is crucial in smartphones, no matter the price, but, unfortunately, this is where the Moto G42 fails to live up to expectations. The phone is equipped with a triple camera set-up consisting of a 50 MP primary lens, an 8 MP ultrawide + depth shooter, and a 2 MP macro. You also get a 16 MP selfie shooter. 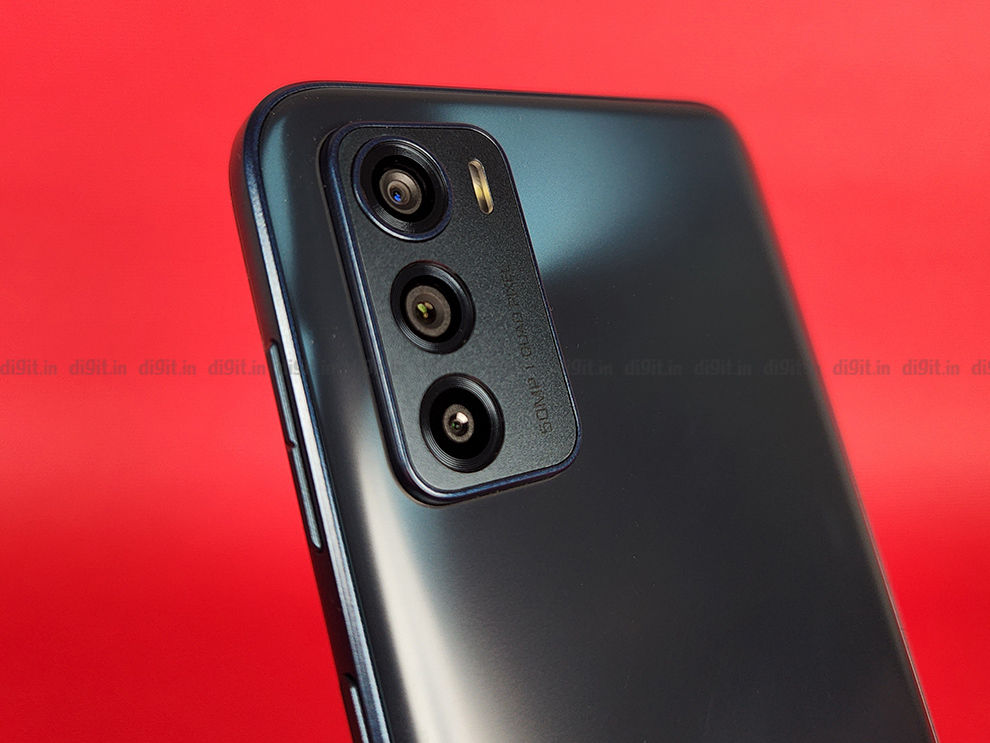 In daylight, the primary lens outputs decent HDR shots with good colours and sharpness. However, the dynamic range is not the best we’ve tested at this price – details in shadows are often crushed and highlights are often overexposed. There’s a 50 MP mode as well which outputs unbinned images with more clarity but the dynamic range drops even further. 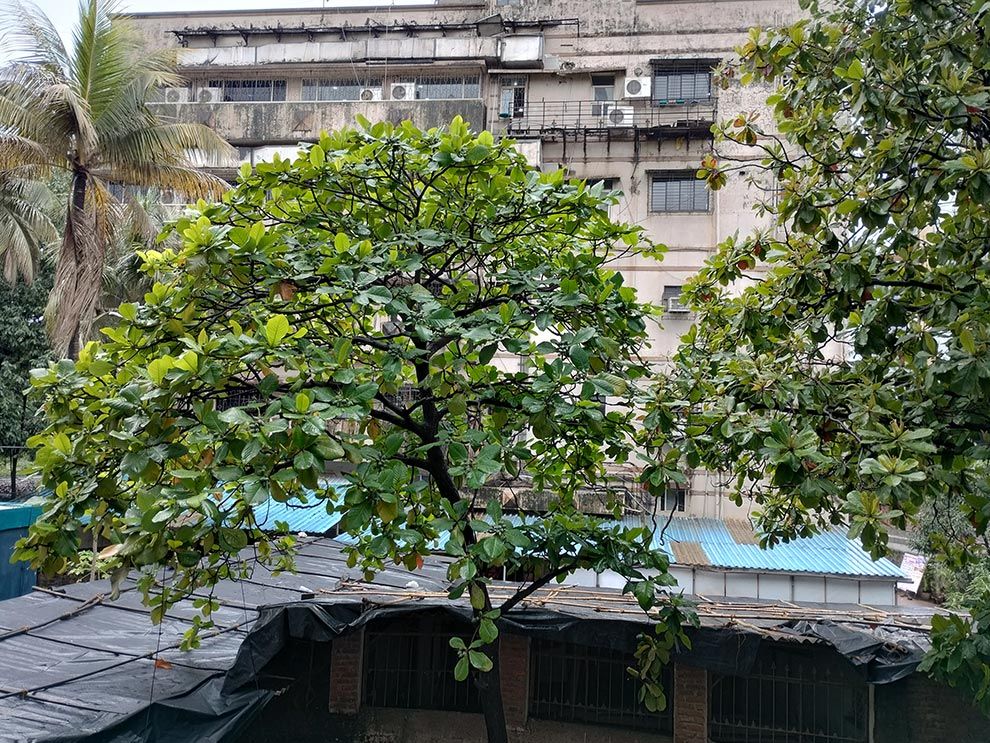 Indoor images look decent, but if you pixel peep, you will notice some softness. Portrait images come out looking nice with decent edge detection and good colour. In low light, the Moto G42’s images are extremely noisy and soft, even with Night Mode active, which is disappointing. 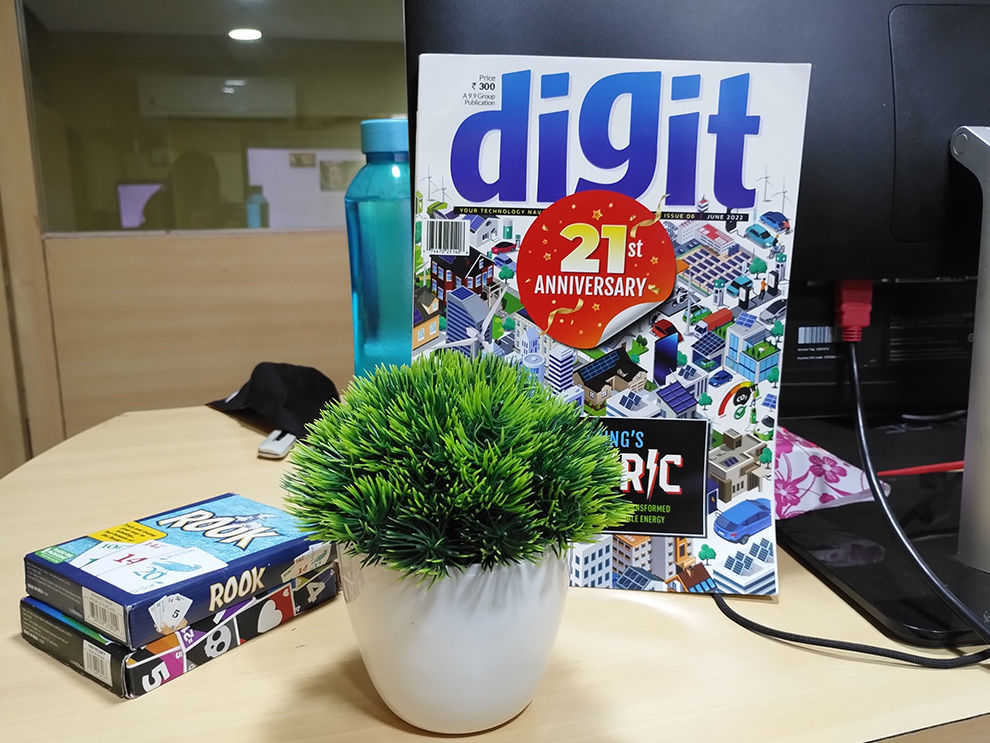 The ultrawide lens, again, outputs mediocre images and the colour is not consistent with the primary lens. The dynamic range, once again, is not up to par. Macro shots via the 2 MP lens come out decent if you have a steady hand since there is no stabilisation. Selfies are, again, mediocre with good colour but blown-out highlights. Night-time selfies are grainy and noisy. You can check out some uncompressed image samples from the Motorola Moto G42 here.

For video, you can shoot at 1080p at 30 fps only on both rear and selfie lenses but the footage is not the best, once again, when it comes to dynamic range and sharpness. Overall, the camera experience is mediocre and it doesn’t match up to some competitors such as the Nokia G21 and Redmi Note 10s.

Battery life is another crucial factor in most users’ purchasing decisions and the Moto G42 has you covered on this front. The phone is equipped with a sizable 5,000 mAh cell with a 20 W TurboPower charger provided in the box. Do note that the phone only supports 18 W charging though.

Our day consisted of benchmarking, clicking photos and videos, gaming, social media browsing, and more, and the phone still sat at around 32 per cent battery at the end of the day from a full charge, which is excellent. If you are a light user, you can easily expect 2 days’ worth of battery life from the G42. 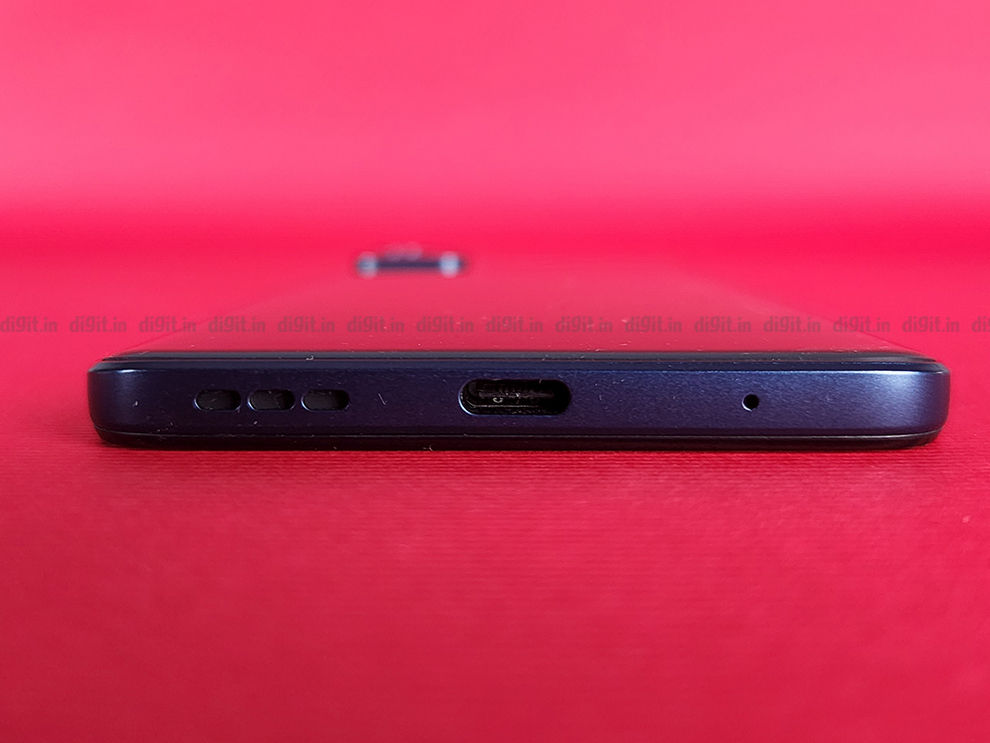 Moving on to charging, the charging speeds are slow in comparison to the Realme 9i and the Redmi Note 10S. You only get 18 W fast charging support, so the phone charged from empty to full in 2 hours and 25 minutes, which is quite sluggish by 2022 standards.

Of late, Motorola has been launching phones with noticeably slimmer profiles; much to the delight of users who detest bulky phones. The Moto G42 follows that tradition as well. The phone is extremely lightweight; only 174.5 g. It is also pretty thin at 8.26 mm. This makes it one of the more lean and streamlined phones under ₹15K. The phone feels good in the hand, but the edges are slightly sharp which can be a tad uncomfortable. 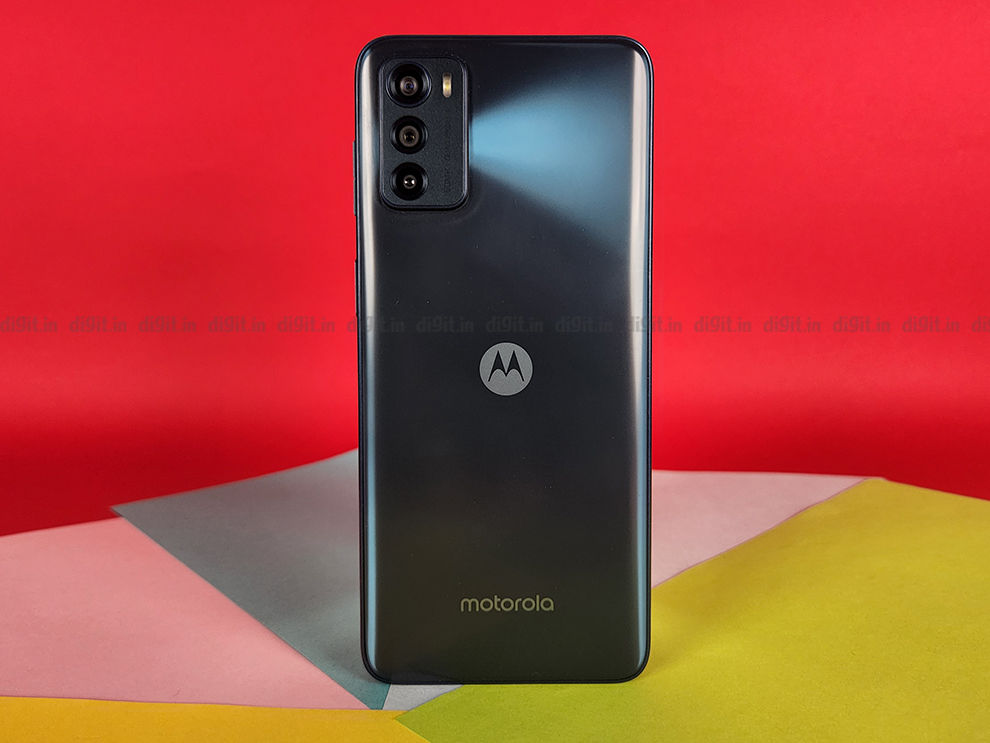 The back panel is made out of PMMA plastic which sports a premium glass-like finish. The camera module is made of aluminium, so this phone punches above its weight when it comes to design. The back panel, however, is very prone to smudges and it is slippery, so it is best to use the phone with a case. We got the Atlantic Green colourway for review and the colour looks very classy, however, the Metallic Rose colour variant looks good as well. 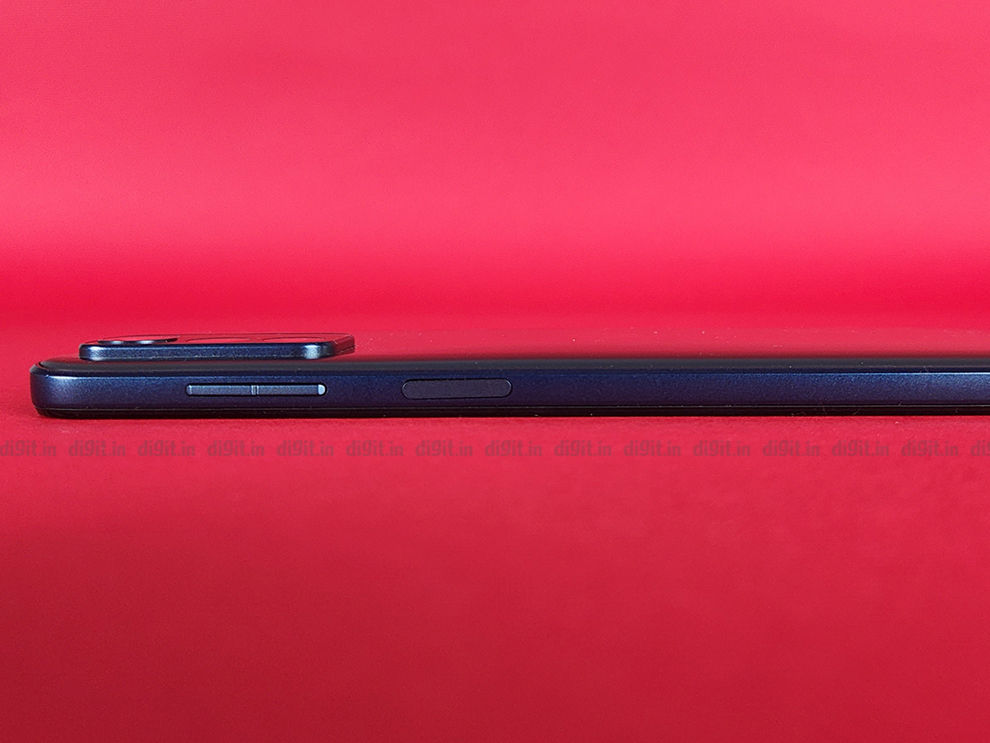 On the right, you get the volume rockers and the power button. The fingerprint sensor is embedded in the power button and it worked flawlessly throughout our testing. The volume buttons are a bit difficult to reach if you have smaller hands. The bottom of the phone houses the USB Type-C port and on the left, you get the SIM tray which can hold two SIMs and a microSD card. 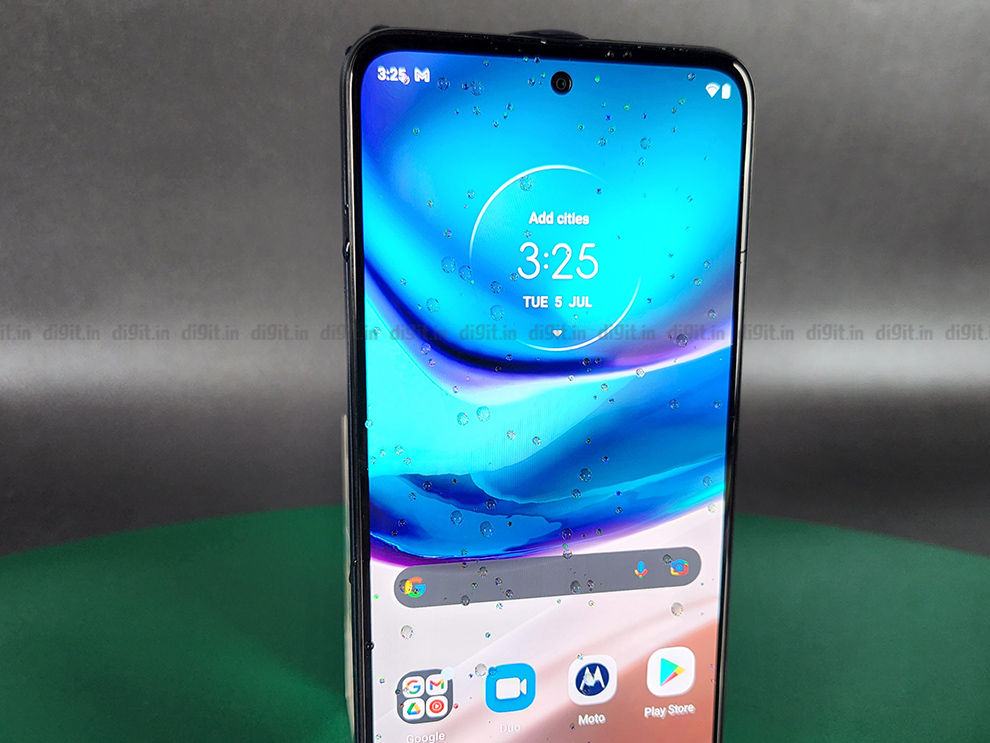 On the top, you have a 3.5 mm jack. The phone also has stereo speakers on the top and bottom. As for the front, the bezels are considerably thick, especially the chin bezel. The display has a punch-hole cutout for the selfie shooter and it is topped by a layer of Gorilla Glass 3. You also get IP52 dust and water resistance, which is rare at this price point.

The Moto G42 rocks a 6.4-inch AMOLED display with Full HD+ resolution. However, there’s no high refresh rate support, with the display being limited to 60 Hz. In comparison, both the Realme 9i and Redmi 10 Prime support 90 Hz refresh rate. The display produces good visuals with pretty accurate colours and good viewing angles. 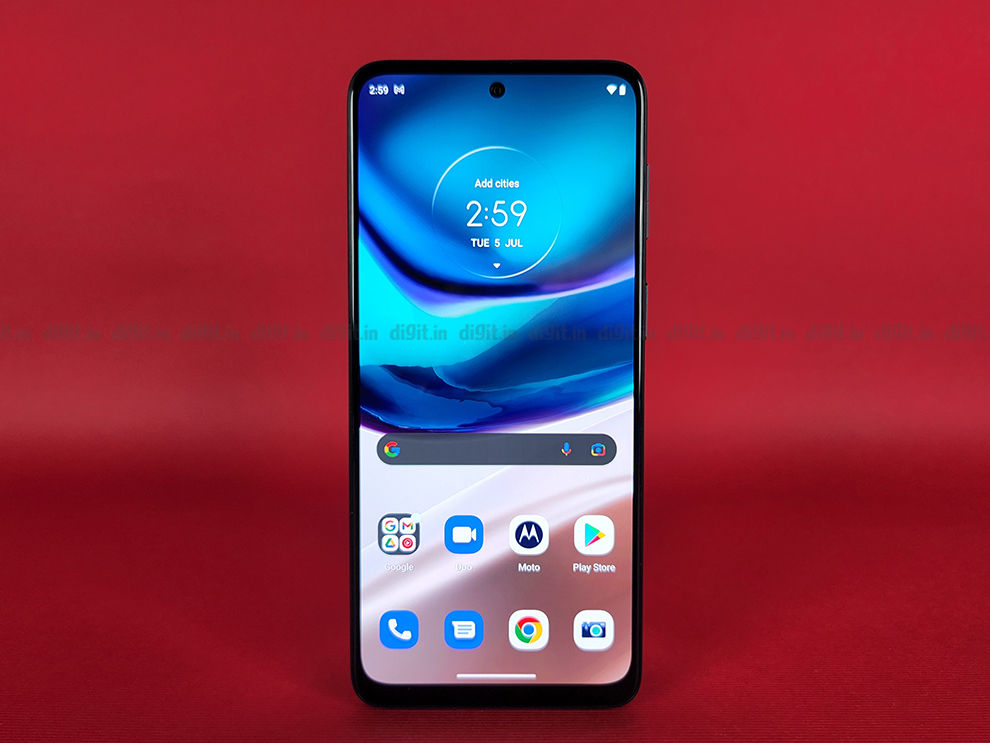 The peak brightness is rated at 700 nits but we recorded a peak brightness of 527 nits during our testing. You get good screen legibility, even in sunlight, which is a win at this price point. FHD+ content pops and looks vivid with true blacks due to the AMOLED screen. The display is immersive enough and the stereo speakers with Dolby Atmos support add to this. The display, however, isn’t HDR certified but it does come with Widevine L1 support, so you can enjoy HD videos on streaming apps.

The Motorola Moto G42 is an extremely impressive smartphone under ₹15,000. Not only do you get a premium-looking smartphone, but you also get an array of features such as an AMOLED display, stereo speakers with Dolby support, near Stock Android experience, good battery life, and decent real-world performance. All at the competitive price of ₹13,999. However, the camera experience is mediocre, at best. Many competitors such as the Nokia G21 or the Redmi Note 10S provide a much better experience in this regard, so if photography is your main use case, consider these alternatives instead. If you’re looking for a phone that can handle gaming and video editing a bit better, consider the Redmi 10 Prime. However, the Moto G42 still offers a pretty balanced experience across the board; with the exception of its camera system. However, the phone’s elder sibling – the Moto G52 – costs only ₹500 more and offers some additional features such as a 90 Hz refresh rate and 33 W fast charging, so Motorola is essentially competing with itself. We only hope that the Moto G42 sees some discounts in the future to be a more alluring buy when put side by side with the G52.

All over 10 Tencent Merchandise Now Halted for Several Months

How to Build a Movie Resume (And Why You Need to)

Inclusion And Expertise Techniques For Power Providers In The …

Planner: The latest networking events in the Upstate Aug. 12-18